Back to blog
April 2021
Nicholas Dimitriadis

In 2020, the collectable sports market was not only reinvigorated, it was taken to a level never seen before by collectors and fans of the hobby. The jump in demand lead to a massive surge in value that carried over strong in 2021.

The result?...We now have cards that are breaking records almost on a daily basis, reaching values well beyond anyone’s expectations.

Here are 5 cards worth well over $3 million

With the new wave of investments that hit the collectable sports card market in 2020 it was only a matter of time until new multi-million dollar cards emerged. While there were numerous cards that broke the $1 million mark, none seemed to be able to dethrone the Honus Wagner T206…until August, 2020. The extremely rare “1/1” 2009 Bowman Chrome Draft Prospects Superfractor Mike Trout sold for a record breaking $3.9 million claiming the title of most expensive baseball card in the world and most expensive collectable sports card of all time. The card was graded a NM 9, with the authenticated autograph being a given a perfect 10 by Beckett. 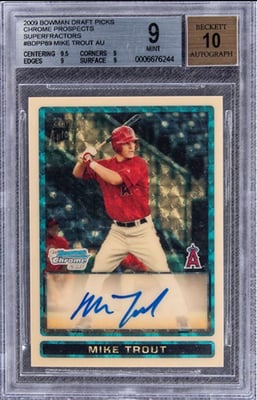 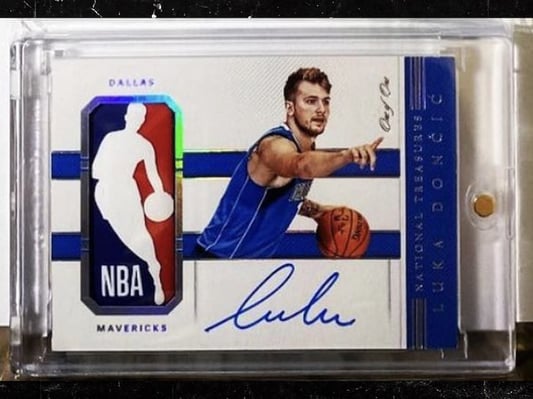 In January, 2021 all previous records were shattered once more. 1 of only 6 PSA 9 graded 1952 Topps Mickey Mantle cards sold for a truly jaw-dropping $5.2 million. It’s not the first time we’ve seen this card sell for astronomical prices though. In 2018 a 1952 Topps Mickey Mantle sold for $2.88 million, claiming the title for second most expensive sport card in existence, right after the $3.12 million Honus Wagner T206 from 2016. 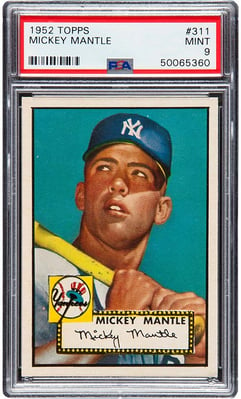 But for $5.2 million not only did it surpass the 1909 Honus Wagner, it dethroned the 2009 Bowman Chrome Draft Prospects Superfractor Mike Trout to become the most expensive sports card ever to be sold

Nothing has topped the 1952 Topps Mickey Mantle since its sale in January of 2021, but one card managed to tie it. 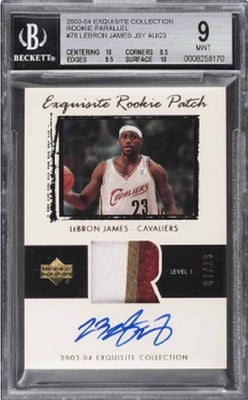 With a print-run of just 23, this Beckett graded 9 (with a perfect 10 for the autograph) 2003-04 Upper Deck Exquisite Collection RPA LeBron James card sold for a massive $5.2 million. With this price tag, it not only dethroned the $4.6 million 2018-19 Panini National Treasures Basketball Luka Doncic card to become the most valuable basketball card in existence, it is tied for the most valuable collectable sports card of all time.

The Honus Wagner T206 was long considered the Holy Grail of sports cards. Issued by the American Tobacco Company from 1909 to 1911 and with only 57 copies known to exist, this was (and still is) one of the rarest and most expensive cards ever printed. Its record-breaking journey started in 1933, where it claimed the title of most expensive baseball card in existence at $50. 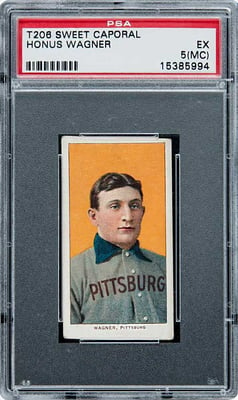 Fast forward to almost a century in the future…The Honus Wagner T206 sold for $2.8 million in 2007, shattering the record for the highest price ever paid for a baseball card. While that price was truly astronomical for a sports card (especially in the mid 2000s,) it rein did not stop there. In 2016 a PSA 5 (yes, 5) sold for $3.12 million setting the record for most expensive baseball card yet again.

In August 2021, this card shattered all previous records yet again when a SGC 3 1909 T206 Honus Wagner sold for $6.6 million during Robert Edward Auction's Summer Auction.

Which other cards would you like to see us cover? Let us know in the comments below.

1971 Topps Baseball: Everything You Wanted To Know

1971 Topps Baseball is wildly popular based on the player selection, key rookie cards, and the...

If you were to guess a 1970s Topps that gives collectors both positive and negative...
Copyright © 2021 Unopened Packs Inc. All rights reserved.
Investing in sports cards involves substantial risk of loss and is not suitable for everyone. We do not provide financial advice, nor do we guarantee results from using our content. As with everything, always conduct your own research.