Back to blog
February 2021
Nicholas Dimitriadis

Ichiro Suzuki Rookie: What Is The Value of “Once In A Lifetime Cards?"

First off let’s address the question, “what are once in a lifetime cards?” Simply put, they are cards that were once available in packs, but aren’t any more, cards that you could hope to get only during a very small period of time... and redemption cards fit perfectly in this category.

Perhaps one of the most (if not the most) intriguing redemption card to consider, at least in the collectible baseball card world, is that of Ichiro Suzuki. The 2001 Bowman Chrome Ichiro Suzuki Gold Refractor #351 to be exact.

But why is this card worth talking about? Well…it may be worth multiple 6 figures but nobody is really talking about it…  because it's rare and most people have never seen it.  Let’s take a look at some card facts.

About the Ichiro Suzuki Rookie Card

To begin with, Ichiro was an immediate and iconic baseball star.  Bowman Chrome caught on to this early on, and decided to create a very limited "parallel" card called a Gold Refractor.  This card was limited from the very start with only 99 copies ever being printed.

Of the 99 tribute cards, 50 were made in English and 49 in Japanese. Furthermore, these weren't released as "cards you'd find by opening a pack."  While you could open a pack and ultimately get this card, you would only find it as a redemption card, meaning you literally got an "I-O-U" for the card.  In that case, if you actually opened a pack containing this "redemption card," you would have to submit it for redemption.

...and here lay the next point.  The deadline to send these cards in for redemption was June 30th, 2003. So if you opened up a pack today and found a redemption card, you can no longer get the card.

Thus, an iconic player, who had a scarce card, was made even scarcer to accommodate his global fan base, and on top of all that came with an actual deadline for finding it. These points were visible to anyone who looked for them, but almost no one did. This is a very big deal because at the time, it was something that could be easily overlooked. But... as the old cliché goes, hindsight is always 20/20.

So now what? The redemption period ended years ago. Whatever currently exists circulating in the market, or buried in a box in someone’s attic, is all that will ever exist.  It can no longer be found in a pack.

We have established that the card is extremely rare, but rarity and demand are only 2 pieces of the value puzzle, what is the third?

Finding a Gem Mint Gold Refractor, one in PSA 10 condition is very rare; almost impossible actually. In fact, there has only been 1 Gold Japanese Refractor that has ever received a PSA 10 grading.

Now fast forward 20 years and Ichiro’s global appeal has only grown in both in the US and in Japan, thus demand for his collectibles are not just in North America, they extend globally to Asia as well.

How Much is This Ichiro Suzuki Rookie Card Worth?

Well considering there is only 1 PSA 10 card that exists today, there is no definitive price, but there are a lot of correlating data points to help us value it. 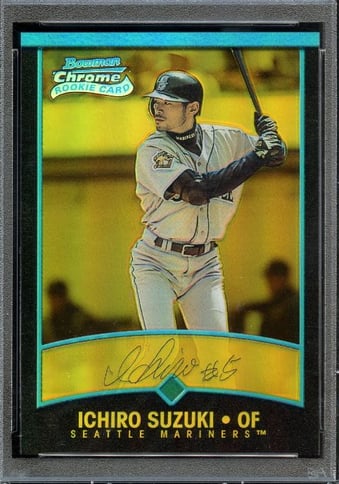 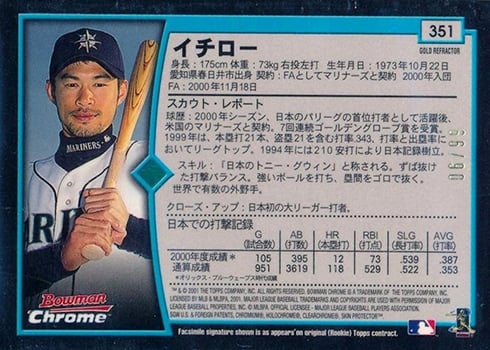 First, let’s look at some other baseball rookie cards for comparison:

With Ichiro’s rookie card card arguably being rarer than those above, it would be safe to say that its real value is easily cemented in the 6 figure range. Let's try to ball park a price for it based on the comparison's above.

* Only 49 Bowman Chrome Gold Japanese Ichiro's were made. That compares closest to Derek Jeter's Certified Gold

* All of the above are in exceptional condition

* Right now, Ichiro is retired and out of the spot light while Pujols and Trout are still active. However, he should be going into the Hall of Fame in 2025.  Thus, the interest in this card may fly under the radar until it gets closer to that vote.

Thus, what might this be worth?  Perhaps the floor for this card is the PSA 10 Certified Gold Jeter and where it goes from there is left to the market.

The takeaway from this story might be that valuable cards are all around us... if... we know what to look for.

So what are your thoughts? Do you agree with our breakdown? What other redemption cards do you think are worth 6 figures? Let us know in the comments below!

Investing In Fleer Michael Jordan Cards? Here Is What You Need To Know

If you are a Wax Tray Collector, you’re in possession of some very desirable items! Barring a...

If you were to guess a 1970s Topps that gives collectors both positive and negative...
Copyright © 2021 Unopened Packs Inc. All rights reserved.
Investing in sports cards involves substantial risk of loss and is not suitable for everyone. We do not provide financial advice, nor do we guarantee results from using our content. As with everything, always conduct your own research.