Back to blog
March 2021
Nicholas Dimitriadis

Pitchers are often overlooked for the heavy hitters, and home-runners, but Nolan Ryan is an exception.

The undisputed all-time strikeout king of baseball, Nolan Ryan was elected into the Hall of Fame in 1999. Throughout his career he managed to accumulate a remarkable 7 no-hitters, and had the ability to dominate every game he was in. As such, fans to this day continue to look for some of his best cards to add to their collection.

So which are Nolan Ryan’s best and most valuable cards? 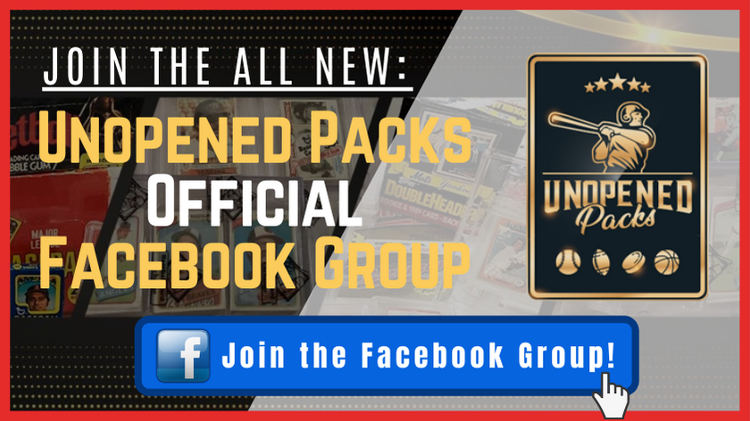 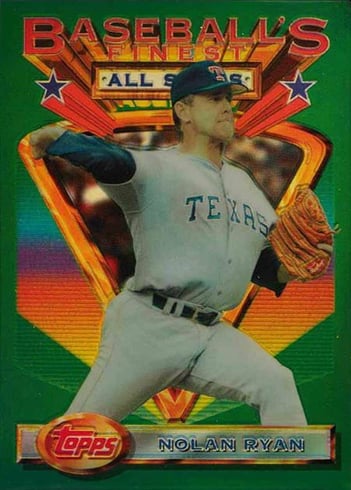 Starting off our list with a fan favorite among Texas fans, we have the iconic pitcher’s first (and also his last) refractor card from the 1993 Finest set. 1993 marked the end of Nolan Ryan’s MLB career, with the refractor card picturing the pitcher about to execute one of his famous fastballs. Highly graded versions of this card are very hard to come across, but if you do manage to find one, they command a high premium. 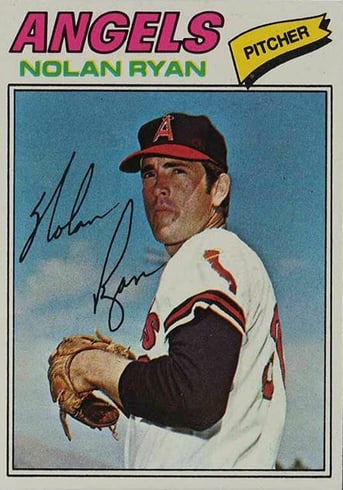 Picturing a focused Nolan Ryan ready to execute a massive pitch, the 1977 Topps card is number 2 on our list. Sporting his iconic Angels uniform accompanied by his signature to the left, this is one of our favorite designed cards. It is also extremely popular among fans and collectors, with many still trying to get their hands on one, even today. Despite its popularity though, finding a 1977 Topps Nolan Ryan in good condition might be harder than you think.

Contrasting the “happier” and “brighter” design of the card, the 1976 Topps card depicts the famous pitcher is a more focused pose, as he is worryingly staring at something in the distance. Despite the image not being the most appealing, there is still great demand, with highly graded cards being very hard to come across. 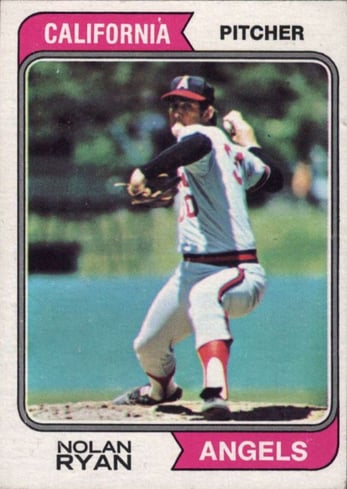 An iconic card for a truly memorable year. Nolan Ryan became the first Major League pitcher to have the speed of his pitch measured mid-game, but that not the only reason the pitch was so important. Despite not having state-of-the-art equipment, Ryan’s pitch was measured to be 100.8 m/h just 10 feet off of the home plate. This exceeded Bob Feller’s 98.6 m/h, previously thought to be the fastest pitch ever recorded. As for the card, it depicts Ryan about to execute his massive pitch in an in-game shot. 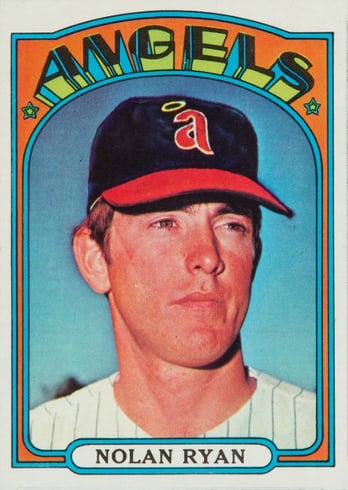 The 1972 Topps card depicts the pitcher during his first year playing for the Angels. Instead of a full-body action shot, we have a close-up of Nolan Ryan sporting a cap with the vintage Angels logo. The card design is also unique with Topps trying out different graphics and color combinations. These however stayed with 1972, as they were never reproduced in any of Topps’ future sets.

1971 marked the last year Nolan Ryan played for the Mets. Unfortunately for fans and collectors the 1971 Topps design was riddled with issues ranging from the black boarders (making the card extremely condition sensitive), to an out of focus image of the player mid pitch. As such collectors were not too keen on the last card to portray the pitcher in his Mets uniform. Having said that, cards in good condition do command a premium, even if the design was left many wanting more. 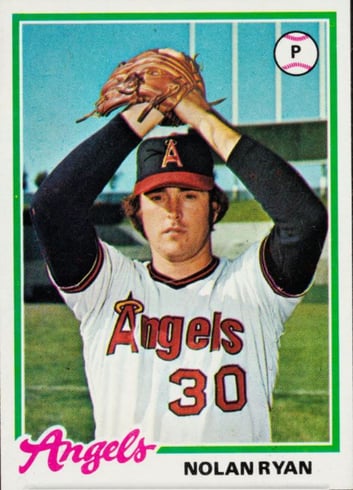 The 1978 Topps card is one of Nolan Ryan’s rarer cards. The player is pictured winding up for a pitch, as he is looking straight into the camera. The thick border surrounding the portrait makes it seem as the ball is just going to be thrown right out of the card. An interesting design and a highly sought after card, finding one of these in mint condition is very hard. 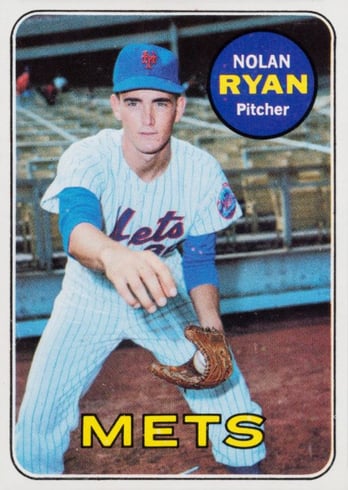 1969 Topps Baseball was Nolan Ryan’s first mainstream baseball card, and his second ever appearance on a card. A very young Nolan Ryan is pictured in a pitching pose, sporting his iconic vintage Mets uniform. At over 50 years old, these cards are very hard to find in good condition, but when found they can definitely go for a premium. 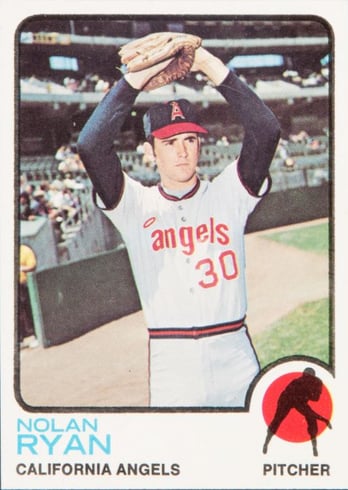 Picturing Nolan Ryan about to pitch during his second year in the Angels, this card is among the most liked cards of the pitcher. Everything from the crisp image, to the pose, the card has a very clean and appealing design. The 1973 card layout is also among our favorites of the hobby.

With over 3,700 cards graded, only 6 have ever been PSA 10’s. The popularity, rarity, and appeal of this card certainly can drive prices up, with the highest price paid being $28,644 in 2009 during the Mile High Card Company October Auction. 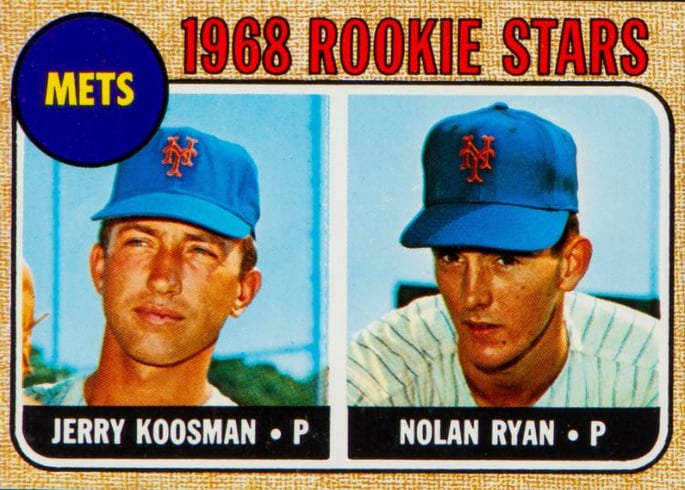 The number one spot undoubtedly belongs to the pitcher’s one and only rookie card. As opposed to the rest of the cards on the list, the Nolan Ryan rookie card does have some notable “downsides”. For one, he shares the card with fellow pitcher Jerry Koosman, a characteristic share by most rookie cards of the era. Because of this, the card is aligned horizontally, which does decrease display appeal slightly. Despite these notable “negatives” however, demand for the card continues to soar to this day, making finding a high graded Nolan Ryan rookie extremely hard.

Which is your favorite Nolan Ryan card? Which one(s) would you add to the list? Let us know in the comments below!

Derek Jeter Rookie Card: Which To Focus On?

Fascinating Facts About The 1973 Baseball Season

1973 was an interesting year for baseball. The 1973 Major League Baseball season was the first...

With a fast ball that seemed to never wane after 27 seasons, combined with a knee-buckling curve,...

One word that describes the 1972 Topps baseball cards would be “loud.” It is hard to miss the...
Copyright © 2021 Unopened Packs Inc. All rights reserved.
Investing in sports cards involves substantial risk of loss and is not suitable for everyone. We do not provide financial advice, nor do we guarantee results from using our content. As with everything, always conduct your own research.